This week in class we’ve been learning the story of Virabhadra — the ferocious and terrifying warrior that arose out of Shiva’s anguish at the loss of his beloved Sati. Virabhadra is the namesake for all those Warrior Poses we do in class, Virabhadrasana I, II, III, the Humble Warrior, and more. 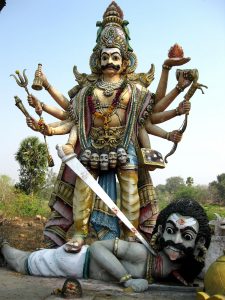 Briefly, Shiva and Sati were insulted by Sati’s father, King Daks’a, who never liked Shiva and certainly did not want his daughter to marry him because Shiva was an outcast from society. He is both the Lord of Meditation and the Lord of Destruction, and as such would dress in rags and cover himself in ash. He had long, unwieldy dreadlocks, hung out in cremation grounds, and was often surrounded by goblins. After Shiva and Sati’s marriage, to spite them, Daks’a hosted a fire ceremony, an auspicious occasion, but did not invite Sati or Shiva due to his lack of love for Shiva. Sati found out about this while the ceremony was taking place, and so she rushed to her father’s home in protest and, sitting dignified in her meditation amid the crowd, she called up her own inner fire so powerfully that she immolated herself.

At the moment of her death, the worlds shook. Shiva knew exactly what had happened. He howled in anguish and went into a rage. He ran to the fire ceremony himself and began destroying things at the party, Lord of Destruction he is. In his misery, he ripped a dreadlock from his head and threw it on the ground, and out of that lock of his hair arose a fearsome warrior, Virabhadra. He was as tall as the sky and as dark as thunderclouds. He wore garlands of bloody skulls and had the most formidable weapons. Everyone knew to run and hide when Virabhadra appeared. This brave warrior finished the job of destroying the fire ceremony for Shiva and he even lopped off Daks’a’s head.

As in all of the Indian tales, this story begins in the middle and ends in the middle too. Shiva grieves for eons while Virabhadra goes off doing warrior-like things. Ultimately, Virabhadra stands for courage and potency, the definitions of the Sanskrit word vira. He is born of the Lord of Meditation’s heartbreak, and he is the one who will bravely step into the fire in order to set things right. In our own lives, his energy represents our courage to stand up and face the things we would rather not face. He is the innate potential within us to wield our own power in a way that restores balance to our lives. He is our own fear and agony and he is the ability to overcome it. 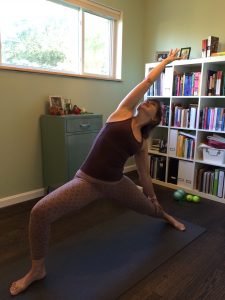 So, anxiety. People experience anxiety in different ways, and therefore there are different ways to address it, but often it is best to look at the source. On many occasions, anxiety is the manifestation of some deeper trauma — a loss, grief, fear, or even anger. When a strong emotion is buried deep, we may even forget the thing causing the emotion, but we are left with the anxiety: a gripping around the heart, a tension in the throat, a “deer in the headlights” immobility. Yoga addresses the physicality of the experience of anxiety.

Sometimes the person might need more activity, a flowing practice that is connected to the breath to help move the tension out of the body. Sometimes the person might need more stillness, to inwardly address what is coming up for them. It depends on the person and the situation. Either direction takes courage. Through yoga practice and even breathing techniques and meditation, one can develop the strength of inner fire, the potency to step courageously into the world, or into one’s own mind, and face the deeper source of the anxiety. A warrior pose with some steady, deep breathing may help.

If you are experiencing anxiety, first be kind to yourself. Remember that feelings are like waves in the ocean, they come and they go but they need time. And, try some yoga. If you are not sure where to begin, contact me, let’s talk. Together we can find a doable practice that is suitable for your needs and goals. Relief is possible.

Thursday, May 21, 7:00-8:00pm Suggested Donation $10-25 100% of the proceeds will go to support those in need during this stressful time through So Others Might Eat. Let your self-care be caring for others as well.  Please join Wildflower Yoga in support of those who are facing incredible challenge right now.  SOME provides food, healthcare, and housing to those in need. Tell your friends. Grab your mat, blankets, and eye pillow and tune in Thursday May 21. Register for the Yoga Nidra Benefit here. The Zoom link will be sent via email by 5pm on that day.

Please sign up for the Wildflower Yoga newsletter. Learn about new workshops, tours, and classes.

In September of 2016 I earned the Yoga Therapist Certification from the International Association of Yoga Therapists. Find out what that means. 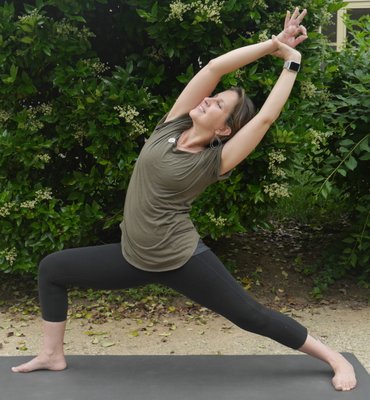 Very little grows on jagged rock. Be ground. Be crumbled, so wildflowers will come up where you are.